The numbers were down on expectations, not surprising given the horrific weather forecast of driving snow and sleet. I looked up to the sky and crossed my fingers, then back around at the sixty or so souls, all waterproofed up, ready to walk eight miles from Chester-le-Street to Durham Cathedral.

We sheltered in the Church of St Mary and St Cuthbert, founded in 883 by the Community of St Cuthbert, when they finally settled after their seven years of wandering with the body of St Cuthbert, the Lindisfarne Gospels, the head of St Oswald, bones of St Aidan and many other relics and treasures. But fears of further Viking attacks in 995 led them to leave Chester-le-Street and eventually head to Durham, where the great Norman Cathedral was built in honour of St Cuthbert.

And this was our pilgrimage – to walk this last section of St Cuthbert’s final journey, though unlike the original walkers we thankfully weren’t going via Ripon. Chris Kilkenny, official historian of The Northumbrian Association, amused and informed us with interesting stories, pointing out the stained glass windows that told the stories of the Community’s wandering. Chris is an expert on St Cuthbert and his e-book ‘Cuthbert Coffin Trails’ contains numerous walks linked to the wandering, gathered from his “lifetime obsession.” 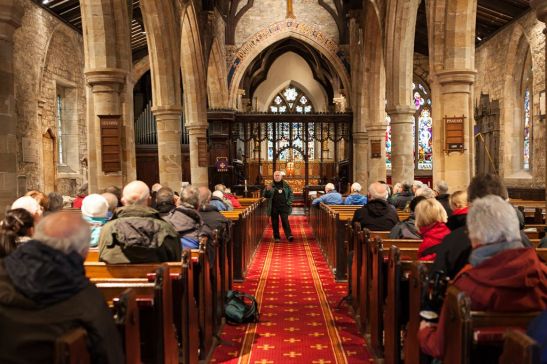 And then off we went, through the park and past Lumley Castle, built in 1389 by Ralph Lumley after he’d returned from wars in Scotland. He didn’t live too long in his beautiful new castle though, as he was executed for plotting against King Henry IV.

Through rain sodden fields we plodged, looking back at a tiny Angel of the North, and on to Great Lumley.

We were approaching the steps down to Finchale Priory when I caught the beginnings of a story from behind and turned to catch the rest of it. It was a feller called Dave Shotten, who later described himself as a story-teller interested in any strange tales about Durham. But this story was about the odd shaped field on our right.

“I used to go hunting there with my grandchildren,” he said. “And I was wandering over there one day when I found a Bronze Age arrowhead and some Roman coins. Septimius Severus they were. And so I went back a few times, exploring, but this one particular time, not long after, my car was blocked in by this huge Range Rover. Harsh words were exchanged and then the farmer pulled a gun on me.”

Dave reckoned the field contain some significant archaeological site but that the farmer doesn’t want his land digging up and investigating.

“And there’s definitely the remains of some buildings that look to be worth investigating,” he said, before adding yet another component. “There’s a long standing story of a rune-stone found in those fields as well,” he said. “It was about twenty, thirty years ago. The farmer’s Christian and so he chucked it in the river, because obviously it was Pagan and so he thought it was evil or something. And for the next four or five years his farm and family suffered from really bad luck.”

We were coming down the steps to Finchale at this point and he pointed along the river.

“It’s up there, where he chucked it in. I went swimming to look for it, and to see if I could find anything else. But I found this really strange kind of horizontal whirlpool instead. I was going round and round and was very close to drowning and I’m a good swimmer mind you, and I’m used to diving.”

We crossed the wooden bridge that led to the beautiful 13th century Benedictine Priory and found soup and bread provided by Northumbria Water, as well as friends Maria and Anna.

“We’ve just seen an otter,” said Anna, pointing at the river. “When we were stood on the bridge waiting for you.”

I smiled, unaware of the significance.

“It’s St Cuthbert’s Day,” she said. “We were stood with this photographer who comes here all the time and he’s never seen an otter in six years. It jumped out the water a couple of times but then disappeared when the cameras came out.”

Anna is the daughter of sculptor Fenwick Lawson. Immersed in the stories and culture of Cuthbert, she smiled widely.

“People talk about taking Bede’s miracles of St Cuthbert with a pinch of salt, but how symbolic is that? On St Cuthbert’s Day?”

She was referring to the miracle written about Cuthbert when he was up at Coldingham. Another monk followed and spied on him, wondering what he did each night when the rest of the monastery fell asleep. He walked into the waves up to his neck and sang the praises of the sea for hours. And then, when he came out, otters came with him and dried his feet.

I mentioned Dave’s story of the shotgun toting farmer to Anna and her eyes widened.

“We used to play all over these fields when we were kids,” she said. “My brothers were chased off that field by the farmer. He shot one of their mates in the bum.” 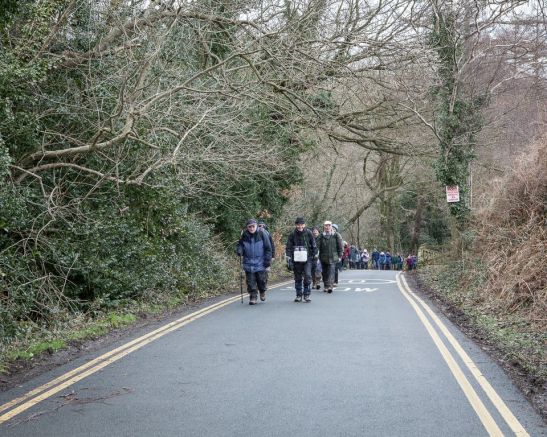 Walking out of Finchale (photo by Paul Alexander Knox)

The soup was great, a lovely touch by Northumbria Water. Chris Kilkenny paid tribute to the late John Danby, chairman of the Northumbrian Association and a long time leading campaigner in bringing the Lindisfarne Gospels back to Durham. Then he gave us some great stories about Finchale and St Godric and, after checking the skies once more and hoping our luck would hold, we were off again; up the hill, in-between the high walls of HMP Frankland and HMP Low Newton, with more than 1,200 prisoners either side of us, and over the fields towards Durham.

We could see our destination ahead of us; Durham Cathedral and its great tower. I walked with the artist Alan O’Cain and his wife Juliet , as the whole group stretched out into broken isolated fragments. 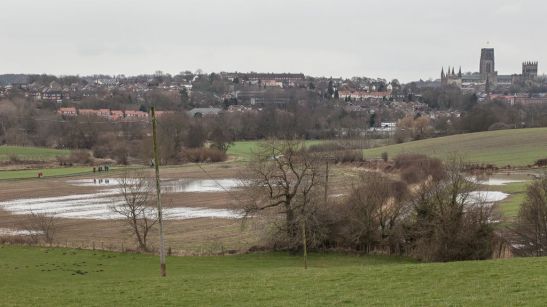 On our way to Durham Cathedral (photo by Paul Alexander Knox)

Alan said he went to Bede School in Sunderland but they never learnt anything about Anglo-Saxon times and how this region played an important role. In fact they didn’t even learn about Bede himself.

“The other students used to call me Cuthbert,” he said. “It was my nickname through school. I don’t think it was related to the saint though. It was just that I was clever and had glasses and they wanted to think of a name to suit. ”

“It was the name of the swotty one in The Beano,” I reminded him.

When we got to the market square we were met by Northumbrian Pipers and the banner of St Cuthbert, reproduced by The Northumbrian Association.  Chris Kikenny told us stories of how English kings went off to fight the French and each time the Scots came pouring down to invade. The banner of St Cuthbert was taken up as a protector of its people and the Scots repelled. It was held aloft at the Battle of Flodden in 1513, where 14,000 men were massacred in less than four hours, the vast majority of them Scottish. It continued as a symbol of Northumbrian unity until the 16th century Reformation led by Henry VIII when it was burned in an attempt to stamp out the area’s strong catholic identity.

And so we followed the new banner instead, held aloft by John Cuthbert, Honorary President of the Northumbrian Association, with the pipers playing underneath.

And we all walked up to Durham Cathedral, built by the Normans between 1104 and 1130, voted Britain’s favourite building in 2001 and 2011, for a small and intimate service at the shrine of St Cuthbert. 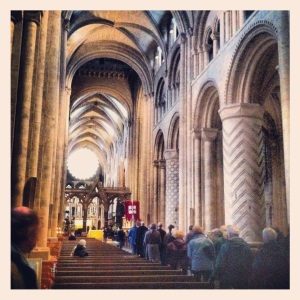 Later that night, there was a larger service, led by the Dean of the Cathedral, with the Bishops of Jarrow and Beverly in attendance. Readings were given, including one by Elizabeth Archibald, Principal of Durham University’s St Cuthbert’s College, celebrating its 125th year. Hymns were sung and I became aware of what people mean when they talk of the ‘theatre’ of the church. The brightly coloured Chapter with their flowing robes lined up in front of us. Candles were lit, the electric lights above dimmed. The choir came forward, flowing white robes of purity and voices of angels. And as we sung and reached our crescendo, streams of light came forth from above. I looked up and the pillars and ceiling reached so high it really was as if they touched the heavens. The power of the Cathedral, with its balance between towering Norman strength and intricate beautiful carving and detail, seemed to heighten even further. And the choirboys sang higher and longer than everyone else, elongating each final note effortlessly, while incense was waved into the air to stimulate yet another sense. And then The Book was held aloft and more readings were followed by a joint procession of everyone to the Shrine of St Cuthbert. And then we spilled out into the Durham night, with the snow falling gently and the cold air tightening our skins. And we smiled. Perhaps St Cuthbert did his best, on his feast day, to turn the weather in our favour, like many of his miracles described.