I’m stood on top of the dunes with the wind stretching my skin, bellowing in my ears like some giant conch. And all around me I have a 360 degree view. The Kyloe hills, with streaks of snow, perfect clouds above. Where Aidan would have stood, a man on top of that hill over there, in 635, as he came to answer King Oswald’s request for a bishop. He would have been up there, looking down at where I am, and he would have known instantly where he wanted his monastery to be. The wind whips my pages as I write and I hold on tight to my notebook. It makes me smile like a grinning idiot. It makes me unsteady on my feet too, and for a second I almost crash from the top into sharp waving grass below, down where the land ripples and breaks over waves and waves of dunes that peak and trough where the North Sea trips over itself. 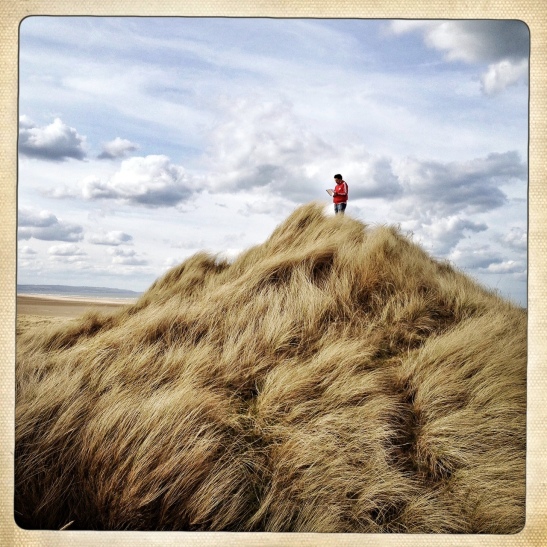 Aidan would have seen this island to my left, would have understood its proximity to the King and Queen on the great basalt rock at Bamburgh, would have understood how nature gave this island the perfect balance; part isolated, part attached to the mainland. It would have reminded him of home; Iona.  And it would have been perfect for his new challenge; to bring Christianity to the often violent and increasingly powerful kingdom of Northumbria. The Vikings would arrive by the end of the next century, to slay monks, steal riches and drag slaves away. But although Aidan lived in a time of warfare, where kings were lucky to last a decade, he would have been unaware of this coming threat from the East. He would have simply looked at Lindisfarne, and he would have known.

I’m on top of the Heugh, the ridge of basalt that reaches all the way across to Bamburgh. Behind and below me, Fenwick Lawson’s Cuthbert of Farne stands sheltered and serene on the neatly manicured lawn inside the ruined 12th century priory. Beside me, a newly erected watchtower, built to resemble the one Bede wrote about, from which Lindisfarne monks watched for news of Cuthbert’s death on Inner Farne. Seagulls hang in the air, then take a sharp right and surf on a slipstream. And there, out on the horizon, almost flat save for Longstone Lighthouse, famous for the exploits of Grace Darling, lie the Farne Islands, stretched out, waiting for the flocks to arrive.

I sit on the edge, feet pointing down towards the rocky pebble beach and rippling waves. Across at Ross Links, families upon families of seals cuddle in on flat sand. I can see them slightly moving when I focus, but it was the sound that attracted my attention. Mournful and otherworldly; I thought it was a trick of the wind at first.

Now I’m stood on St Cuthbert’s Isle, listening to shrieking oystercatchers and the warbling of waders. Daffodils bloom inside knee high ruins. Cuthbert would have spent time in solitude here, before retiring further to Farne. The wind has dropped a little, the late afternoon sun illuminates the sea that breathes slowly and separates us from the mainland. A large wooden cross stands firm, a reminder of all that has passed before and yet still remains; St Aidan, who arrived from the North. Oswald and Heavenfield; Cuthbert, who graced royalty but preferred walking the hills and speaking to whomever he came across, and to be with his God, in the beauty and harshness of here and Farne; And later, Eadfrith, who would have worked here in silence, creating the beauty and importance that is the Lindisfarne Gospels. 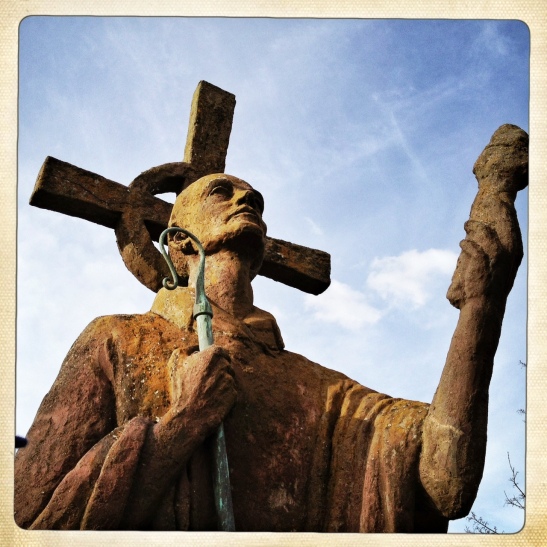 Paul and I sit down inside, our backs resting against walls much smaller than before, but the weight that holds our backs, encrusted with lichen and crawled over with earth, has stood for centuries. Beneath the cross in front is a huddle of rocks, many covered in modern day graffiti. Or is it? One has the Lord’s Prayer daubed on it. Another says ‘Guide Me.’ Names from around the world. Syria, France and Spain. Love and Peace. I pick one up. It says ‘God Help Me Find You.’ It feels wrong, like I’m interfering in someone else’s dreams, someone else’s plea to God and St Cuthbert. And so I ask Paul if he has a marker pen but he just smiles and shakes his head. I want to write a message for my Daddy. I want him to know that I’m thinking of him, that even though I know almost nothing, I have never forgotten. 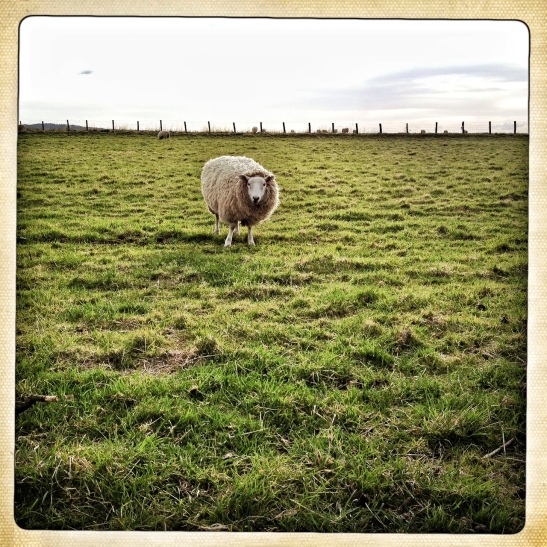 I stand up and walk to the edge, look at a seal that’s looking back at me, its head bobbing around in the water, as curious about me as I am about him. The wind picks up again. The sea does too, coming in with greater force. My seal friend treads water, still looking. Then his head sinks under the water a few seconds, but there he is again. One of Cuddy’s ducks skims the waves in ahead of him, arrows off to the causeway. I walk up the rocks at the very far edge of this tiny island. A sign flashes, reflecting in the sunlight, it’s bright white letters screwed into rock.

And then, with the seals still mourning at Ross Point, we decide to head back to Lindisfarne before the sea cuts us off. And so we step from rock to rock where we can, crush cockle shells and mussels into damp sand where we can’t. And we make it back with soggy feet before the sea pushes in from our left and strands us.