“Galloway is known for its Christian church, more ancient than the churches of Iona or Canterbury…the countryside was rich. It is tempting to speak of milk and honey. Medieval food rents were paid in cheese; and the wax from local bees lit the shrine of its holiest saint. The pastures not only fed cattle, sheep and goats, but made the country famous for horse-breeding. For home consumption the south-facing valleys produced cereals. There was timber in plenty, and an abundance of wildlife and fish. In the Middle Ages and probably before, salt was panned along the coast. Wool, hides, horses and hunting dogs, and crafted jewellery were exported; and Galloway had minerals – iron, copper, silver and a little gold. In exchange its people could afford to import wine, oil, fine glass, millefiori rods for jewellery making and artefacts that lent prestige.”

Down the wooded dene we go, following the stream that sparkles before us, until the sea, its blue waves reflecting the sharp spring sky, opens up either side of us and the cliffs peel away behind.

We’d followed an elderly man through the woods; a modern day pilgrim we naturally assumed, making his way alone to St Ninian’s Cave for some contemplation. We catch up to him on the pebble shore. Bob Bourne’s his name, aged seventy-four. He’s driven all the way up from Hertfordshire, more than four and a half hours in the car. And he’s come to walk along the cliffs here because this is where his late wife liked to bring him. He’s had two heart operations in the past two years, had a pacemaker fitted nine months ago, was told without this and the accompanying medication he wouldn’t live longer than a fortnight. He’s been building up his stamina ever since. The first week he couldn’t walk up his stairs without having to stop for a rest halfway up. Last week he managed four hours walking; two hours uphill and then two hours back again. And so he’s driven all the way up here to walk down through the woods to St Ninian’s Cave and up on top of the cliffs, with its stunning view of the Isle of Man and across the Irish Sea. He’ll brace himself against the wind, steady himself on sticks. And he’ll smile and remember his late wife that he always presumed would live longer than he.

“They gave her six months to live,” he said, “but she lasted only six weeks.” 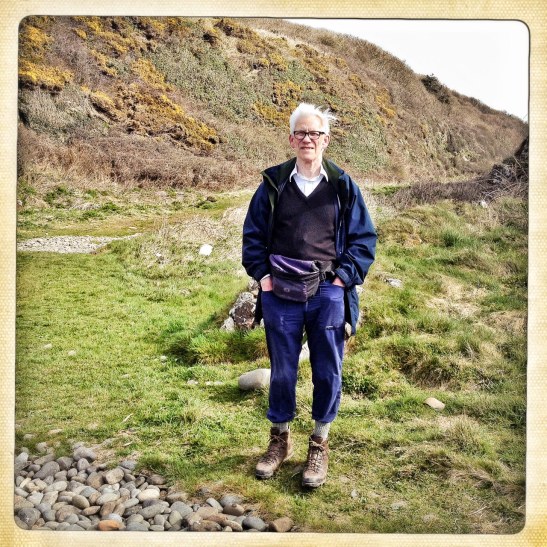 Paul and I say our goodbyes, crunch pebbles and climb rocks, then enter the cave that St Ninian used for personal prayer before he passed away himself in 431. Homemade crosses of driftwood, tied together with washed up string and fishing line, have been placed on the inside walls, alongside Anglo-Saxon crosses etched into rock in the 7th century. One of the stone crosses on the ground has a part missing. I wonder if someone chose the missing stone for a personal dedication and placed it inside the cave. And so I climb down to the beach, choose a beautiful smooth rock, kiss it and bring it back up. I think of loved ones in this world and the next, and then complete the cross with it.

After some time in the cave, looking at the names marked on the walls, the offerings and gestures, I look outwards at the sea rolling in and see the first few spots of rain. I walk to the entrance and look to my left. There, on the far side of the pebble bay, I see a little figure climbing up the cliffs, two sticks glinting in the remainder of the sunlight that seeps through closing clouds. And although he can’t see me, is too preoccupied in his own challenge and thoughts, I give him a wave and wish him peace.

Janet Butterworth just smiles when we arrive one and a half hours late at The Whithorn Story and apologise for not contacting her because of lack of reception. I show her the stones I picked off the beach by St Ninian’s Cave, still in my coat pocket, and she gets us coffee and makes us feel welcome.

I ask her three questions and she takes about fifteen minutes to answer them, putting the questions into context and providing interesting background information before coming to the point perfectly. She shows us information and artefacts from the early Christian period. Whithorn was not a Celtic monastery such as those at Lindisfarne and Iona; it was much earlier than these two. St Ninian, from what we know about him, went to Rome from Ireland and was the first person to bring Christianity to what is now Scotland. I record Janet tell us about Whithorn but I’ve stupidly left the cable from my voice recorder to my laptop at home, so I can’t place it on the website yet.

Whithorn is nestled into the land, she says. It wouldn’t have been seen by the sea. This is where St Ninian had his monastery, not the coastal Isle of Whithorn a few miles away that used to be a tidal island like Lindisfarne.  Ninian, monks, visitors and pilgrims that followed him would have come by sea into the Isle of Whithorn, then crossed the few miles to this place that has always been a spiritual retreat. And Whithorn didn’t suffer as much as others when it came to Viking invasion. Archaeology and a lack of written evidence to suggest otherwise, shows Vikings were Christianised much earlier here than most other places in Britain.

Janet shows us Viking crosses, early Christian stones with Latin lettering, even one with a swastika. She explains reconstructions and artefacts, then takes us outside to see the monastery and its ruins. She even gives me a free book to help my research. Paul and I celebrate our brilliant experience at The Whithorn Story by going to the sandwich shop next door for sausage and egg sandwiches and chips.

We take to the van again, a little sad to be leaving such a beautiful place but vowing to come back again. We spend time in Kirkcudbright, then head back across the border to England and Cumbria, and pull up right by the stone circle Long Meg and her Daughters, just a few miles outside our next location Salkeld. I take the ‘holding cross’ I bought from The Whithorn Story, partly because I wanted to buy something for them treating us so well. It’s made from Olive wood from Jerusalem. I took my now-wife Anna there for Christmas once, when we lived on a kibbutz on the Golan where we fell in love. I took her to Jerusalem with my last shekels a few weeks before she left to go back to England and train to be a nurse. I squeeze the holding cross and think of my family and how lucky I am. It’s perfect to hold, designed to fit into the hand and give reassurance.