At four hundred metres above sea level, Saddleworth Moor is situated within the Dark Peak area of the Peak District National Park. There’s little green here, unlike the previous night; mainly dark brown heather on uneven and boggy land. These moors are covered in a layer of peat, up to four metres deep; decayed plant material more than five thousand years old. The peat up here holds two thousand tonnes of carbon in an area the size of a football field, more than is stored in the same area of forest. I look across the darkness, past clumps of cottongrass and heather that’s been burned and grazed for centuries. Deep valleys are cut into what is a bleak and unwelcoming landscape, but we can’t see any of them from up here; just flatness and darkness and very little sign of life.  It doesn’t feel the place to go striding off in any direction, for a number of reasons. 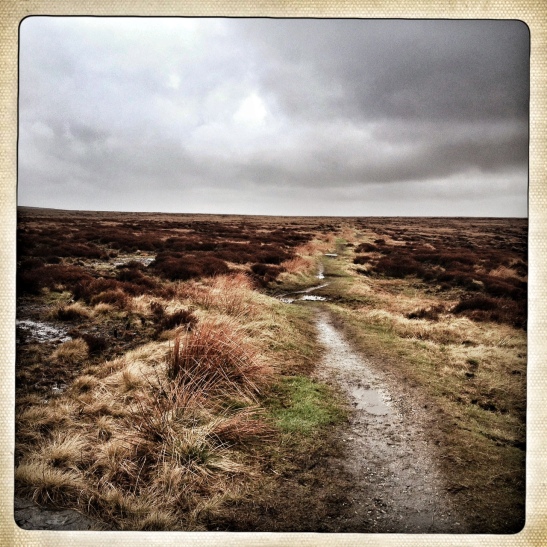 Ruled by the Brigante tribe before the Romans came and never fully conquered by the great Empire, this moor has achieved recent notoriety for particularly gruesome reasons. Ian Brady and Myra Hindley, the Moors Murderers, carried bodies up here, bodies of children they’d mutilated and sexually assaulted. They dug graves for them and pushed them into the peat. There’s still a body out there somewhere, but the murderers have never told the police where it is. And now Hindley’s dead and Brady is classified insane in a high security hospital, desperate to be allowed to die, and so it’s likely the body will never be found.

Cars drive past us at speed, in both directions, eager to get off the top before the dark comes in and traps them, probably conscious of history or the fact it’s the end of the weekend, thinking of things that need doing before yet another Monday morning start to yet another week. Boy racers complete ridiculous overtaking manoeuvres, two or three of them at a time. Ironically, this is the busiest place we’ve stopped at, and yet no one else wants to stop here, they simply want to go past as fast as they can, and that includes the grey winds that are moving steadily, that have been all day but have never given even a tease of sunshine. My fingers start to hurt with the cold and so I head inside the van for some warmth, but we can’t get the gas to work, which means no heating, no hot drinks and no hot food.

Today we drove through Lytham, Halsall and Mellor, the furthest south the Community of St Cuthbert are alleged to have travelled. None of the churches we visited were open, which was disappointing, and so we headed for the moors, not because of curiosity of its recent history, but because it seemed a quiet place to put our heads down on the way to our next destinations, Overton, Ackworth and Fishlake.

Except it’s still not quiet, and now it’s nearly midnight. Cars of young lads screech in noisily next to us and wait for another car to do the same. Paul and I reckon this is the perfect place for drug dealing, up in the dark between Leeds and Manchester. We can see the light pollution that rises either side of us, that produces an eerie glow, but we can’t see anything of either city. Cold inside and outside the van, we decide to try and warm ourselves by going to bed. The van is on a slight slope, width-wise and length-wise, and cars are still whizzing past at top speed.

And as soon as he’s finished that sentence the rain starts hammering down, loud and heavy like it’s mixed with sleet and hailstones, banging off the roof. And the cars keep coming, every minute or two. I can hear them a mile or so away, picking up noise like a gathering storm, until they go hurtling past and rock our van from side to side. And then silence, just for a little while, before the wind increases and buffets us too, and yet more cars hurtle past.

This entry was posted on May 1, 2013 by richardwhardwick2013 in Blogs by Richard W Hardwick and tagged dark peak, peak district, saddleworth moor.