Mutilated Effigies, a Deserted Medieval Village and a Sub-Sea Engineer in Cuthbert’s Town

The church at South Cowton is fortress-like, its solid no-nonsense walls and thin windows built to withstand the tumultuous times it was built in – the 15th Century; when life in the North of England and Southern Scotland was constantly ripped apart by raiding bands from both sides of the border, and wars, when they happened, were often brutal massacres.

We’re surprised to find that the church, standing all alone in a field, is unlocked, conscious as we are of its history. Richard Conyers built this Church of St Mary and the nearby Cowton Castle, between 1450 and 1470, at the start of the Wars of the Roses. South Cowton was not only on the borderlands between England and Scotland; it was also embroiled in the war between the houses of York and Lancaster. Not that anyone from South Cowton would have been able to tell you about life in their village during the series of wars for the throne of England; you see, Richard Conyers wanted the land their houses were built on for pasture. Cattle were obviously more important to him than people. And so he had South Cowton demolished and evicted the tenants. There’s only the castle and the church left.

The church isn’t used anymore, though there is a gravestone from 2012 outside and recent fresh flowers. There’s also a double page feature from a 2007 Northern Echo cellotaped to a table inside, highlighting the fact that the Community of St Cuthbert are said to have stopped here with the Saint’s body. The church is quite standard. It has beauty, but then so do all the churches we have stopped at. It’s the effigies I’m drawn too, of two women and one man. They lie on their alabaster backs, figures from half a millennium before, feet on a small dog and hands in praying position.  The man is Richard Conyers himself, the women his two wives.

I walk across to the women; effigies that haven’t just aged, but have had initials and marks carved into them, particularly the top one, cut like runes into the alabaster, across the eyeball and eyelid, initials carved into cheek and forehead like mutilation or self-harm. There’s something terribly sad about this woman, lying on her back with her praying hands starting to disintegrate. She has the same startling and unsettling effect on me as Fenwick Lawson’s Pieta in Durham Cathedral. 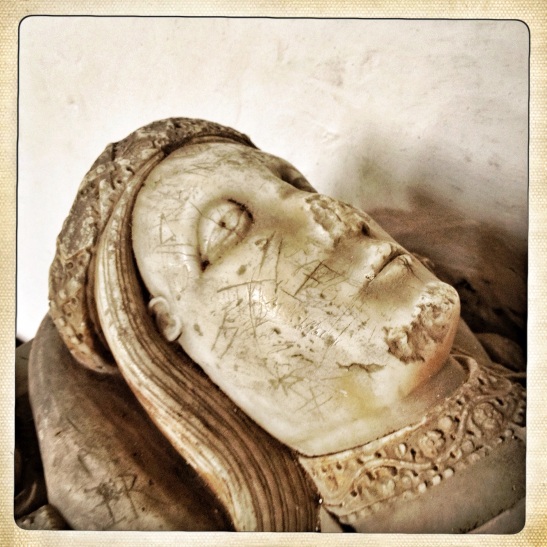 I wonder what she thought of her husband’s decision to destroy twenty family homes and evict the people. Did she disapprove? And if so, did she voice her disapproval? Or was she a ‘good wife’, obeying her husband’s wishes, understanding that it was a man’s world? I’d like to think she was horrified by the decision, whatever her actions, though I can’t help but shudder at the thought that the cutting up of her may have been done by ancestors of the evicted tenants.

We walk across the fields to the castle, now used as a farmhouse. We can’t find a footpath so just walk straight across. The deserted medieval village of South Cowton is on the far side of the castle, the South West. By the time we get near the barbed wire fence, three dogs come running over, growling and barking viciously. But the farmer comes over and he’s polite and helpful, allowing us to pass through his farmyard and take a direct route rather than the proper right of way that circles all the way round.

“I was born on this farm,” he tells us. “But don’t ask me my age. My father bought this place the year before I was born.”

I look across to the castle. Not a bad farmhouse.  Then I ask him about the fields where South Cowton once stood.

“They’re just over there,” he says, pointing. “They’re classed as ancient monuments so I can’t use them.”

“Nah, not really. You couldn’t do anything with them anyway. There’ll be stone foundations under the ground as soon as you get past the surface.”

He says there’s very little interest in past history around here, but when we say we’re following a 9th century journey he knows it’s connected to St Cuthbert.

“I get metal detectorists every now and then,” he says, “asking if they can search the fields. But I tell them they’re not allowed.”

We thank him and walk onto the larger field; just a small pile of straw in the middle, a pile of tyres near to the farm, a telegraph pole or two. It looks like any other field, although I know from visiting the site of the Battle of Flodden earlier that innocuous looking fields can have grave histories. There’s not enough time to spend here though. We have to visit Barton and we’re hoping to meet the church warden and an historian. I wish we could spend the night here. It might not make any difference to anyone else but I feel I owe it to the villagers to at least spend the night remembering them. But instead we walk away, and the dogs run up to us again, growling more fiercely, and I wonder what happened to the villagers when they were forced to leave, if any of them resisted and were punished, or if they just stood and watched their homes get destroyed.

We arrive at The Parish Church of St Cuthbert in Barton late, too late for the church warden, which is a shame because the church is locked and we don’t have anyone to let us in or talk to us. We have a picnic in the graveyard and wait around half an hour just in case, but it seems Barbara hasn’t got my e-mail sent this morning when I finally got a reception. St Cuthbert’s church at Forcett is open though, and there’s plenty of Cuthbert related sights and creations there, from banners to stained glass windows and embroideries showing his miracles. 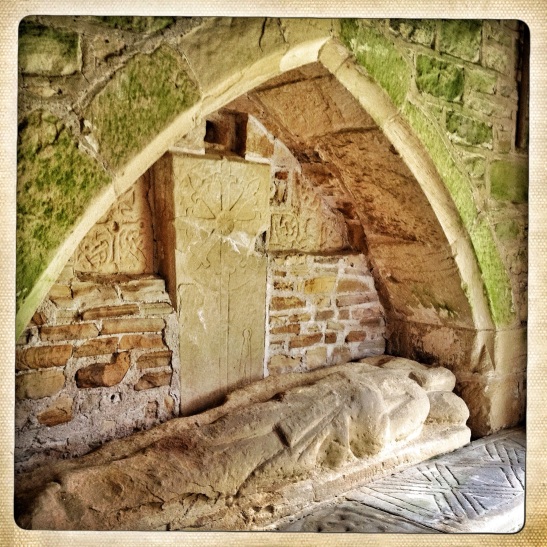 We walk behind a curtain at the back of the church, which, although fortress-like on the outside, has the perfect balance between simplicity and beauty on the inside. The back of the organ is covered in graffiti, or rather the wooden contraption that protects it is covered in graffiti, most of it scratched into the surface. Children wrote their surnames too, which seems rather foolhardy. Step forward R Wappat , aged 14 in December 1947, and D Masterman, aged 14 in May 1958. There are some dates and information about the Second World War, perhaps homework cheating and not written at the time, but then I do find graffiti and drawings from 1914. 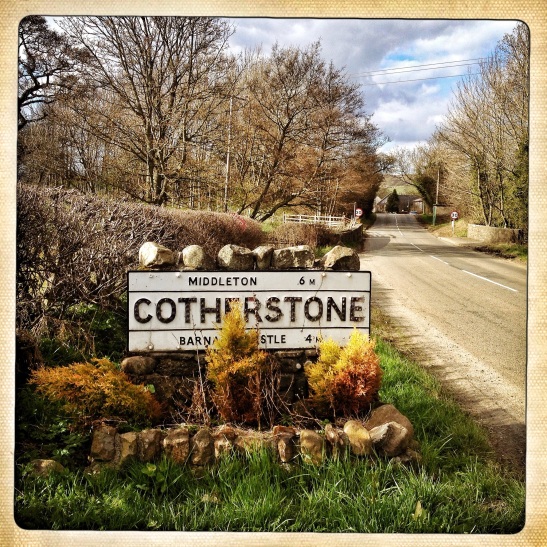 An hour later we’re in Cotherstone, dismayed to find this Church of St Cuthbert locked too. It’s becoming a little too much of a feature for us, after the first week of unlocked churches and trust that we found through Northumberland, Cumbria and Galloway. The church is tall, slim and elegant, with beautiful chickens and cockerels on its lawn. I find a house number on the front door of the village hall; someone who holds a key for the hall, and I wonder if they have a key to the church too. But when I knock on the door a lady opens it in tears. My timing is terrible; she’s having her dog put down. She tells me where the key-holder is though; just over the road. 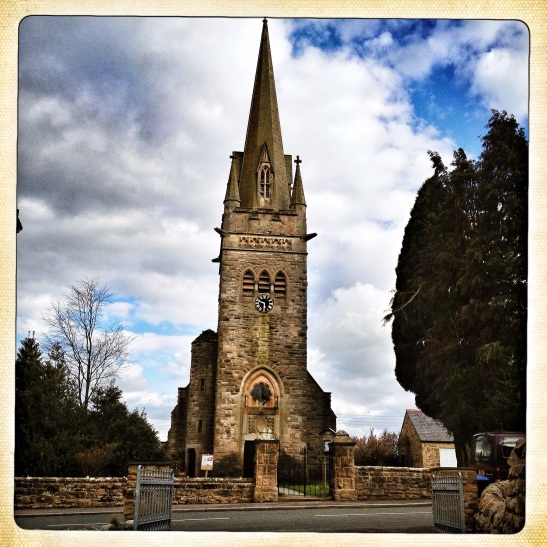 The man looks at Paul and then back at me and looks suspicious when I ask him if we can borrow the church key. But he doesn’t say we can’t go into the church. He comes with us instead of handing the key over. He’s interested in the journey of the Community of St Cuthbert and says, as far as he’s aware, it’s not well known that Cotherstone means Cuthbert’s Town, and that legend states his body rested here. He tells us he loves living in Teesdale and that he works all over the world but always looks forward to coming home again. His name’s David Metcalfe.

“I’m a sub-sea engineer,” he replies. “I do any form of off-shore engineering; wind farms, gas and oil pipes, that sort of thing. We bury our pipes down under the sea bed so the fishing trawlers can’t get them with their hooks.”

“Do you go down there yourself?”

“No no, I use an ROV, a remotely operated vehicle, to scrape the sea bed and remove anything that’s down there.”

“And whereabouts have you been?”

I ask him where the worst place is he’s been, and I’m surprised, but somehow it’s a pleasant surprise, when his answer comes back. 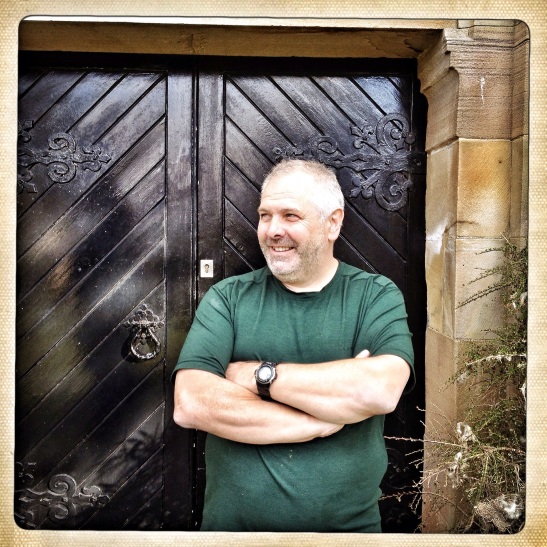 I smile and think of St Cuthbert out there on the Farne Islands, stuck for months, surviving on onions and God.

“It’s not all bad that we do,” says David, interrupting my thoughts with a smile. “It might sound aggressive but the ground fills back in again and creates new habitats. But there’s not a lot of fish over in the South China Sea.”

“Is there anywhere there are still lots of fish?”

“Yeah, the North Sea again. If you go up to the North Sea in an ROV, where the Norwegian sector is, there’s a lot of fish up there. We turned our lights on and flooded the area and there were so many fish that we couldn’t see past them.”

And so we say our goodbye’s and head for Marske, and decide we’ll drive up on top of the North Yorkshire Dales to rest the night.

6 comments on “Mutilated Effigies, a Deserted Medieval Village and a Sub-Sea Engineer in Cuthbert’s Town”