Closer to home now; not the home I made for myself, or the home I grew up in, but the home of my grandparents, where my Mam grew up as a little girl, where she met my Daddy, who died two weeks before my second birthday. I’m lucky in some ways; my Mam met another man when I was six. He’s my Dad too. He’s as much my Dad as any man can be to a child. It’s just I have two Dad’s, that’s all; a Dad in this world and a Daddy in another world, wherever it is that we go when we die. Perhaps he’s in heaven waiting for me, with a smile and welcome hug, or perhaps he’s part of this endless cycle of flowing energy.

I’m grateful to Juliet Lunn for writing something about Kirkleatham already. Because the truth is, I asked Paul to drive here first because I’m putting off the places that are pulling me. And that’s doing Kirkleatham a disservice because the church itself is absolutely unique and the walk through the wooded drive from the school we parked in a delight.

This is a million miles away from the images that most people bring to mind when they think of Middlesbrough and Teesside, but then I already wrote that when we were in the Cleveland Hills earlier. I let Paul go forwards alone and I lean on the gatepost and wonder what the rest of the day will be like.

Darlington earlier was a treat. We laid on the grass outside the tall and impressive Parish Church of St Cuthbert, were interviewed by Helen Johnson, a freelance journalist, for an article in North-East Life. She asked questions, scribbled down our answers, made us feel really comfortable and then took some pictures of us. It was amusing watching Paul pose for a photograph – everything was the wrong way round in his mind. But then the Church closed early and so we missed our chance to look inside.

Back in Kirkleatham, I see Paul is talking to someone so decide I’d better go and find out who he is, see if this church is open. As it happens it isn’t, but the man has a key and he’s willing to show us about.

“I don’t go to church myself,” he says, introducing himself as Alan Pink, “I just look after the grounds. The last time I was in church was to redo my vows for my Golden Wedding Anniversary. But we live in the Alms House so we have our own chapel. And I did that because it was a family thing, with all the neighbours involved.”

He’s seventy-seven but doesn’t look it. He’s got a great-granddaughter coming of age this year. 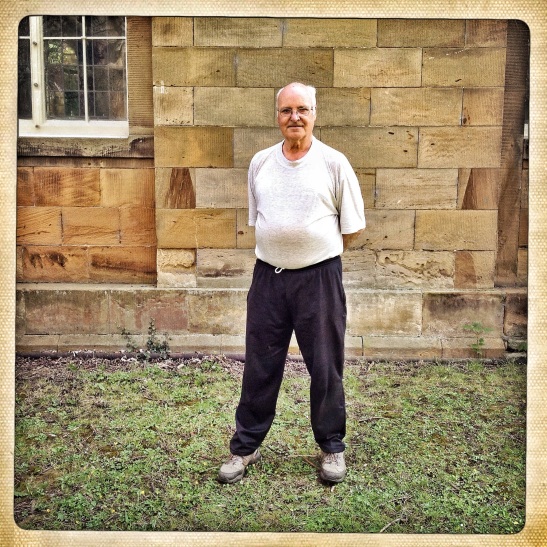 “I do the grounds because it keeps me fit,” he says. “I don’t get paid, it gets me exercise. When I started the grass was up to my waist. I bought a mower out of my own money to get it started. I haven’t even got my own garden.”

“That must have been good exercise then,” I suggest.

“I’ve done loads of exercise in the past. I’ve done the London Marathon”, he says. “I did my first Great North Run when I was fifty-eight and I beat the bloke who won it the next year. I’ve beaten Daley Thompson as well. I did my last one when I was sixty-eight. And I swam the length of the channel in Saltburn baths, 1,340 lengths.”

It’s not all been exercise though:

“I used to be a petroleum chemist,” says Alan. “I analysed all the imports of crude oil, and I analysed products going out like fuel oil, diesel, kerosene – to see if it followed British specification. When I first started the sulphur content of diesel was 0.35%, now it’s in its millions.”

“What was the impact of all that sulphur?” I ask him.

“It’s where the term Smoggies comes from for people from Middlesbrough,” says Paul.

“It goes back to the 1920’s and 30’s when all the steelworks and blast furnaces were in operation,” adds Alan.

He talks a little about his father, who came to Middlesbrough to find work.

“He died when he was sixty-two. I’ve well outlasted my Dad. But my mother’s still alive. She’s ninety-one and her complexion is absolutely beautiful.”

We say our goodbyes and head to Wilton, once a village but now a borough of Middlesbrough. The Church, on a grass carpet of daisies, is locked. A sign on the door says ‘We may not have a vicar but the church is still here. If you need information about weddings, baptisms, service times, please contact church wardens.’ A woman in a pink stripy top pushes a bicycle through the graveyard, a bunch of red tulips in the basket at the front of her bike. She tells us how beautiful this place is, a hidden secret amongst power stations and chemical plants.

“I’ve got an eighteen year old son and a husband in here,” she says. “I love it. Well, I don’t love it but you know what I mean.”

We chat a few minutes. It doesn’t feel right to ask for a portrait, to ask more questions about her son and husband. And so we say goodbye. I ask Paul to pass by Eston, so I can see Jubilee Court, the residential home my Gran and Grandad moved to in the eighties. I sit on the grass outside for ten minutes, remember playing carpet bowls with my Grandad in the corridor, home-made trifles and Sunday dinner, Frank Sinatra and Bing Crosby, having to stay quiet for the football results, walking in the Eston Hills. Next we’re in Normanby; 5 Ambleside Road where my Mam lived until she was eleven. My Gran and Grandad bought the house for £200 in 1938, but they had to move because my Gran was unwell and needed a bungalow. And so they bought 12 South Park Avenue. Paul drives me there and I walk down the road, lean against a lamppost and look at it; small and with no modernisation. I speak to my Mam on the phone. She tells me about the coronation of Queen Elizabeth in 1953.

“The vicar and the doctor and all the neighbours came round to watch it,” she says “because my Grandad had died and left money so we bought a little black and white telly. It was one of the best days of my life.”

I remember stories she used to tell me about her early boyfriends. How she would meet them in the park, stay out in the dark with them, go behind the shelter. But my Gran used to go out with a torch and find them, highlight the terrified lads in the darkness and ask if they wanted to come back home for a cup of tea. I turn around to find the park. I can remember it from when I was a child. But there’s a new housing estate there now. And so I remember playing with my Grandad’s pipe cleaners instead, getting a ride on the back of his motorbike, holding on for dear life even though he rode slowly and carefully.

And then it’s away from my Mam’s childhood stomping ground, with all those stories I don’t want to tell, those I haven’t got time to tell, and those she’s never told herself. And we’re in Ormesby, another beautiful church locked, this time with three padlocks…

And then Marton, not just the home of Captain Cook, but the home of my Daddy as well. The Church of St Cuthbert is the smallest one so far. I walk around the well-tended graveyard, look for the name ‘Walker’, even though I’m sure my Grandpa, Grandma and Daddy were all cremated.  I don’t find any gravestones I can spend time at. I know I won’t but I’m still disappointed. My Grandpa was the church organist here. I wish there was somewhere I could go to remember them, even if there’s nothing I can remember about my Daddy because I was so young when he passed away. 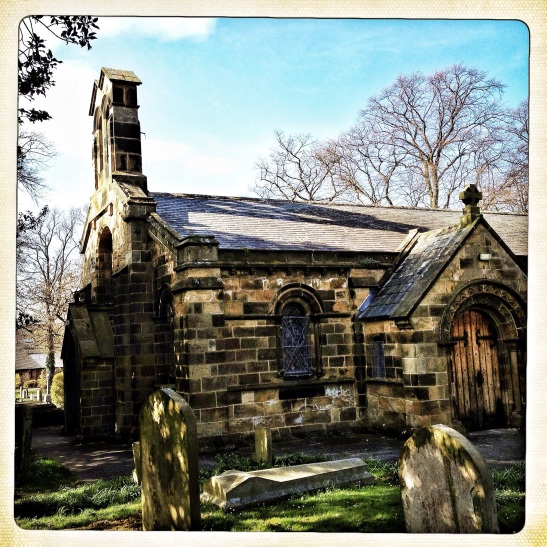 I do know he went to Captain Cook Primary School though, and lived at 53 Gunnergate Lane because I went there plenty as a child. I walk all the way down to number 53, past large semi-detached houses. The house looks just as I remember it. The same tree in the garden. The same garage. I think about all the tools my Grandpa had in there, remember the garden, how my Grandma spent so much time over it. There was a little stone farmhouse my Grandpa made, hiding under a bush, lead figures of animals, the farmer, his wife with a bucket. I played with them like my Daddy did, fingers covered in soil, hidden away at the back of the garden. I wish I’d brought my Grandpa’s walking stick here. And I wish I had the courage to knock on the door. I know there’s someone inside because a man’s face has peered out a couple of times, wondering who this strange man is, leaning on a lamppost with pen and paper, on the other side of the street. I remember my Grandma wiping her hands on her apron, cooking tripe and tongue, the trolley with wheels, loaded with cakes and scones, the upstairs room where my sister and I stayed on occasions, a rolled up carpet in the middle of the double bed to stop us fighting. They never talked about their dead son to us, my Grandpa and Grandma. They never talked to us about what our Daddy was like as a baby, as a boy, as a young man. There’s no point knocking on the door. I’m not going to learn anything. I’ll only come away feeling emptier than I do. Best to remember by spending the night in the hills, like my Grandma and Grandpa did so much, where my Daddy and his brother would have run and climbed and learnt about nature.