The Parish Church of St Cuthbert and St Mary is closed when we get to Chester-le-Street, a great shame considering his body rested here for 112 years. We try the door a few times, step back and shrug, look at each other in disappointment. 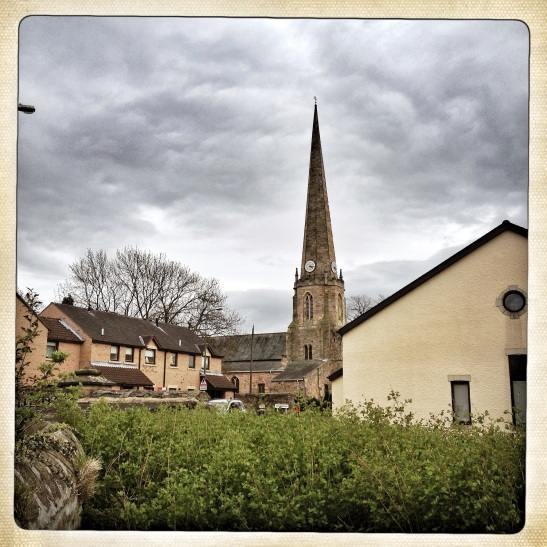 This was also the place where, in the 10th century, Aldred added an Old English gloss between the Latin lines of the Lindisfarne Gospels; the first ever translation of the Gospels into English. This was the end of the seven year journey of the Community of St Cuthbert. Arriving in 883, they built a timber church, thought to be on the same spot of the church we’re standing outside now, which was started in 1056. It’s been suggested that the Community never intended to stay as long as they did, and that was why their church was built out of wood. After all, there was plenty of useable stone nearby – as this was previously Concangis, a Roman fort of some importance.  It has also been suggested though, that this church was built from wood because the church on Lindisfarne in which Cuthbert had been buried in 687 was built of timber.

Those that state the wanderings of the Community of St Cuthbert were not the aimless panicking of refugees but a powerful church visiting its territories and bolstering Christianity; well, they would insist here was a place strategically vital; further South than Lindisfarne, closer to the power struggle between Dane and Angle. The more romantic version suggests Guthred gave them this place because , thanks to a vision of St Cuthbert, Abbot Eadred was able to help place the Dane onto the throne from his enslavement.

But all this is going through my head and Paul is looking at me as if to say; what now?

And so I cross the road and try the door; it’s locked but there’s someone inside. I bang a few times. A woman looks over and ignores me, pretends she hasn’t even seen me. I bang a few more times and then give up. Ah well; we’ve been here before for the St Cuthbert’s Day Walk with The Northumbrian Association, and we’ll come here again.

And so we wander around outside  for ten minutes and then climb back in the van, pulling over in a housing estate to clean the scratches off its side so we don’t get charged extra when we return it in two days’ time. And then we head off down the A1 towards Ripon.

After a night on a cold bare dale above Leighton Reservoir, we drive down into Ripon. This beautiful cathedral city is associated with Saint Wilfrid, for some the pantomime villain to the more austere and humble Cuthbert. It was Wilfrid who successfully argued for Roman Christianity at the expense of Celtic at the Synod of Whitby in 664. Wilfrid’s trump card, apart from his fancy clothes and love of fine things, important when trying to convince a King, was his assertion that Rome followed the teachings of St Peter, and it was he that held the keys to heaven, given to him by the Lord himself. And so King Oswiu chose future glory alongside the Roman Empire, and the promise of everlasting life in heaven, rather than stick to the simpler Celtic Christianity brought from Iona by St Aidan.

As we catch first sight of the splendid Cathedral I encourage Paul to make booing noises but he’s having none of it. Wilfrid, a controversial character expelled from Northumbria a number of times, responded to his exclusions by simply seeking more glory and converting more people to Christianity. The first time he was expelled he went to Rome itself. Later he was protected by the King of Mercia and fostered missionary work in Frisia. 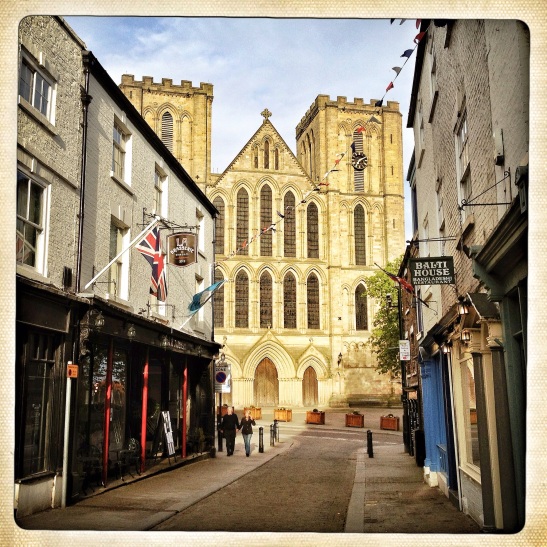 We wander around the Cathedral, founded by Wilfrid himself, with the current church dating from the late 1100’s. The Community of St Cuthbert journeyed south to Ripon in 995, escaping further Danish threats after 112 years at Chester-le-Street. Who knows what they’d have thought about entering the monastery here, bringing with them the body of St Cuthbert, the head of St Oswald and bones of St Aidan, all precious relics of a bygone Celtic age. Cuthbert had followed his beloved Abbot Eata to Ripon in the late 650’s, but they were expelled by Wilfrid for refusing to follow the Roman customs. 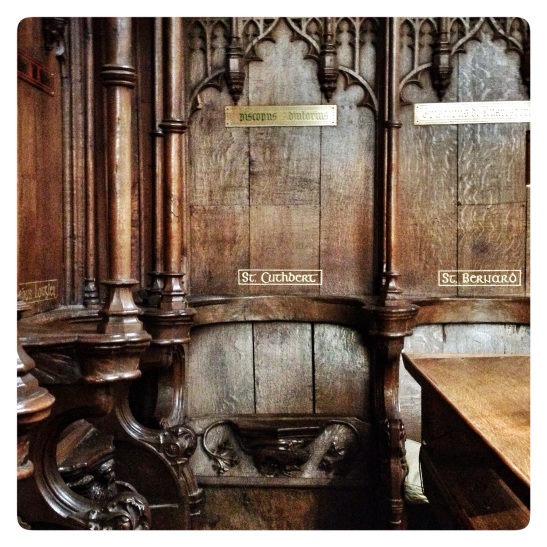 Eata and Cuthbert went back to Melrose. Soon Cuthbert would be prior of Melrose and then Lindisfarne. Eventually, he would give into demands and leave his Farne hermitage to become Bishop of Lindisfarne. The Cathedral is as beautiful as we expect. I buy a guide and flick through it. There’s no mention of Cuthbert, either alive or in a coffin hundreds of years later. They’re proud of their own man, Wilfrid.

The Community of St Cuthbert stayed at Ripon for only a few months and then headed North again. It’s said they were heading back to Chester-le-Street but a miracle made then falter and find another site.  Cuthbert himself wanted to be taken to a place then called Dunholme, and it was here that his body rested permanently. This is where his shrine still exists, in the great Norman Cathedral of Durham.